These are the notes from my DebConf18 talk

Slides are available in pdf and odp.

Starting from Debian, I have been for a long time part of various groups where diversity is accepted and valued, and it has been an invaluable supply of inspiration, allowing my identity to grow with unexpected freedom.

During the last year, I have been thinking passionately about things such as diversity, gender identity, sexual orientation, neurodiversity, and preserving identity in a group.

I grew up in a small town, being different was not allowed. Difference attracted "education", well-meaning concern, bullying.

Everyone knew everyone, there was no escape to a more fitting bubble, there was very little choice of bubbles.

I had to learn from a very young age the skill of making myself accepted by my group of peers.

It was an essential survival strategy.

Not being a part of the one group meant becoming a dangerous way of defining the identity of the group: "we are not like him". And one would face the consequences.

Debian was one of the first opportunities for me to directly experience that.

Where I could begin to exist

Where I could experience the value and pleasure of diversity.

I am extremely grateful for that.

This talk is also a big thank you to you all for that.

Each of us is a different individual, each of us brings their unique creativity to Debian.

How would you describe a person?

There are binary definitions:

I'm going to show a few examples of spectra; I chose them not because they are more or less important than others, but because they have recently been particularly relevant to me, and it's easier for me to talk about them.

If you wonder where you are in each spectrum, know that every place is ok.

An allistic person learns subconsciously that ey is dependent on others for eir emotional experience. Consequently, ey tends to develop the habit of manipulating the form and content of social interactions in order to elicit from others expressions of emotion that ey will find pleasing when incorporated into eir mind.

The more I reason about this (and I reasoned about this a lot, before, during and after therapy), the more I consider it a very rational adaptation, derived from a very clear message I received since I was a small child: nobody cared whom I was, and to be accepted socially I needed to act a social part, which changed from group to group. Therefore, socially, I was wrong, and I had to work to deserve the right to exist.

What one usually sees of me in large groups or when out of comfort zone, is a social mask of me.

This paper is also interesting: analyzing tweets of people and their social circle, they got to the point of being able to predict what a person will write by running statistics only on what their friends are writing.

Is it measuring identity or social conformance?

Discussion about the autism spectrum tends to get very medical very fast, and the DSM gets often criticised for a tendency of turning diversity into mental health issues.

I stick to my experience from a different end of the spectrum, and there are various resources online to explore if you are interested in more.

I hope you get the idea about spectrum and identity.

There are many more, those were at the top of my head because of my recent experiences.

How to deal with diversity

How to deal with my diversity

Let's all assume for a moment that each and every single one of us is ok.

You've been ok since the moment you were born.

Being born is all you need to deserve to exist.

You are ok, and you will always be ok.

Hold on to that thought for the next 5 minutes. Hold onto it for the rest of your life.

Ok. A lot of problems are now solved. A lot of energy is not wasted anymore. What next?

Get to know myself

Get in touch with my feelings, get to know my needs.

Here's a simple algorithm to get to know your feelings and needs:

To know more about Non-Violent Communication, I suggest this video

This other video I also liked.

Forget absolute truths, center on my own experience. Have a look here for more details.

Learn to communicate and express myself

Find out where to be myself

Look for safe spaces where I can activate parts of myself

Learn to protect myself

I will make mistakes acting as myself:

Learn to know my boundaries

Learn to recognise when they are being crossed

How to deal with the diversity of others

Diversity is a good thing

Once I realised I can be ok in my diversity, it was easier to appreciate the diversity of others

Opening to others doesn't need to sacrifice oneself.

Curiosity is a good default.

Do not assume. Assume better and I'll be disappointed. Assume worse and I'll miss good interactions

When facing the new and unsettling, use curiosity if I have the energy, or be aware that I don't, and take a step back

The goal of the game is to affirm all identities, especially oneself.

Liberate myself from imagined expectations.

What is not acceptable 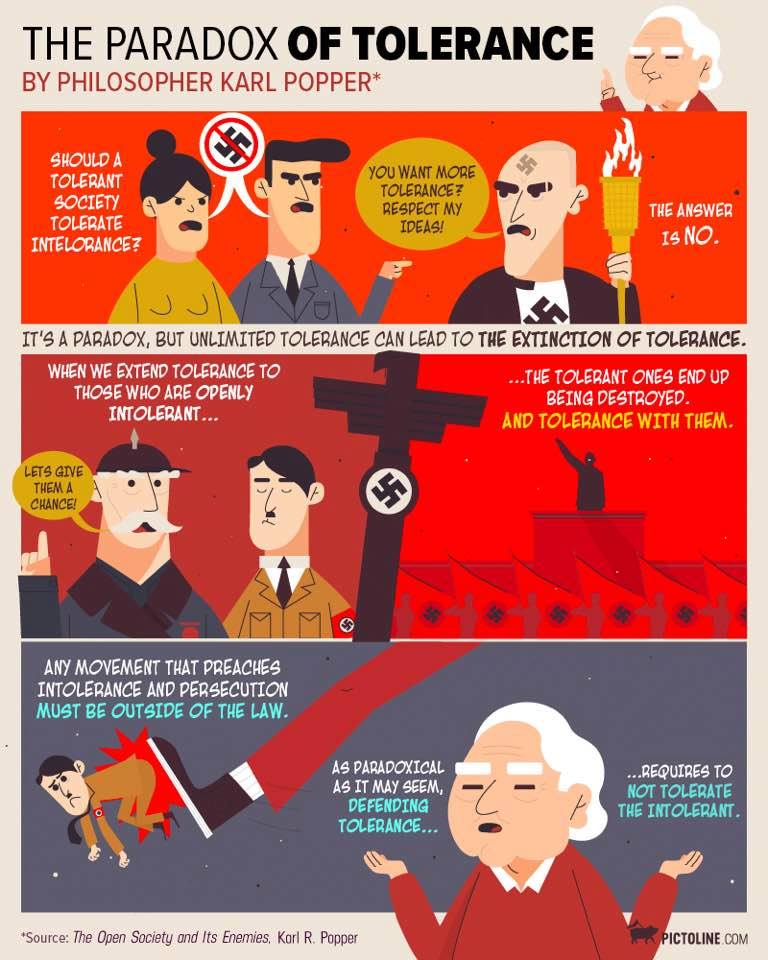 Less well known is the paradox of tolerance: Unlimited tolerance must lead to the disappearance of tolerance. If we extend unlimited tolerance even to those who are intolerant, if we are not prepared to defend a tolerant society against the onslaught of the intolerant, then the tolerant will be destroyed, and tolerance with them. — In this formulation, I do not imply, for instance, that we should always suppress the utterance of intolerant philosophies; as long as we can counter them by rational argument and keep them in check by public opinion, suppression would certainly be unwise. But we should claim the right to suppress them if necessary even by force; for it may easily turn out that they are not prepared to meet us on the level of rational argument, but begin by denouncing all argument; they may forbid their followers to listen to rational argument, because it is deceptive, and teach them to answer arguments by the use of their fists or pistols. We should therefore claim, in the name of tolerance, the right not to tolerate the intolerant.

Use diversity for growth

Identifying where I am gives me more awareness about myself.

Identity can change, evolve, move I like the idea of talking about my identity in the past tense

Take control of your narrative: what is your narrative? Do you like it? Does it tell you now what you're going to like next year, or in 5 years? Is it a problem if it does?

Conceptual space is not limited. Allocating mental space for new diversity doesn't reduce one's own mental space, but it expands it

Is someone trying to control your narrative? gaslighting, negging, patronising.

Entering a new group: impostor syndrome. Am I good enough for this group?

I worked some months with a therapist to deal with that, to, it turned out, learn to give up the need to work to belong.

In the end, it was all there in the Diversity Statement:

No matter how I identify myself or how others perceive me: I am welcome, as long as I interact constructively with my community.

Ability of the group to grow, evolve, change, adapt, create

“The ideas Earthlings held didn’t matter for hundreds of thousands of years, since they couldn’t do much about them anyway. Ideas might as well be badges as anything.

If your identity is your identity, and the group changes, it actually extends, because you keep being who you are.

If your identity is a function of the group identity, you become a control freak for where the group is going.

When people define their identity in terms of belonging to a group, that group cannot change anymore, because if it does, it faces resistance from its members, that will see their own perceived identity under threat.

The threat is that rituals, or practices, that validated my existance, that previously used to work, cease to function. systemd?

Us, and our users, we are a diverse ecosystem

Free Software is a diverse ecosystem

Debian exists, and can move in a diverse and constantly changing upstream ecosystem

Vision / non limiting the future of Debian (if your narrative tells you what you're going to like next year, you might have a problem) (but before next year I'd like to get to a point that I can cope with X)

Debian doesn't need to be what people need to define their own identity, but it is defined by the relationship between different, diverse, evolving people

Appreciate diversity, because there's always something you don't know / don't understand, and more in the future.

Nobody can know all of Debian now, and in the future, if we're successful, we're going to get even bigger and more complex.

Because we're awesome. We got to learn to deal with with that.

Ode to the diversity statement